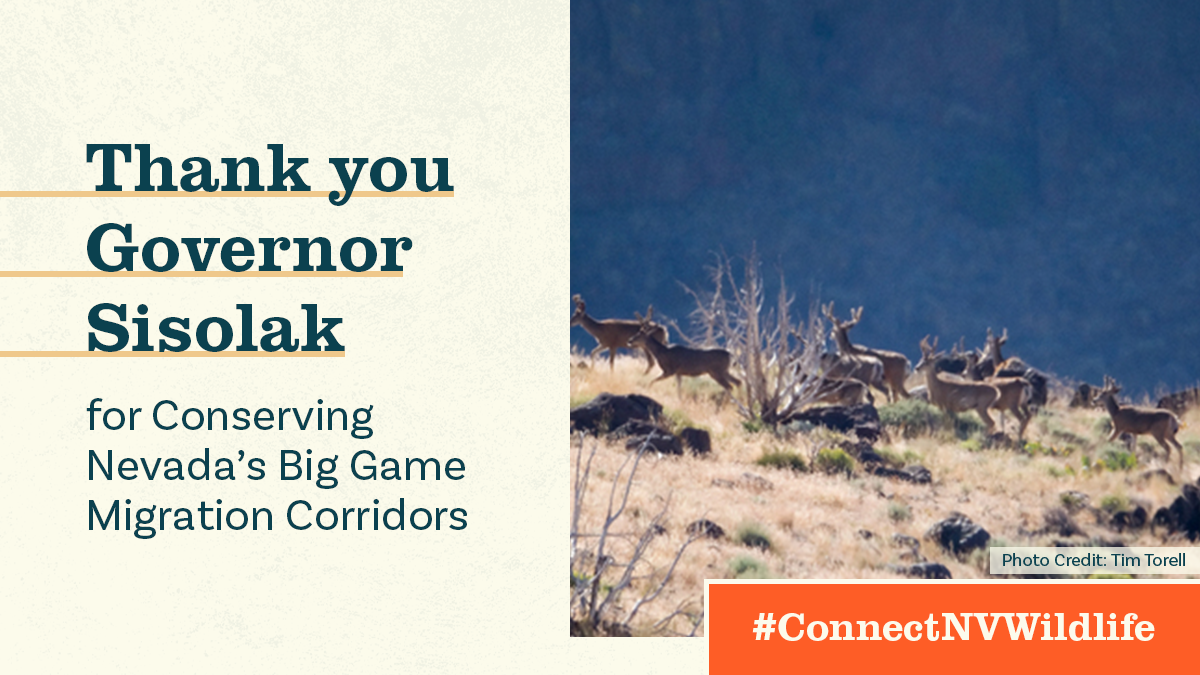 Posted at 22:33h in Releases by Will Pregman
Share

This Executive Order:
– Takes bold steps to restore and conserve intact, accessible natural areas which are critical to maintaining Nevada’s recreation economy. Nevada’s outdoor economy fuels more than 87,000 jobs across the state, providing $4 billion in wages and salaries to Nevadans and draws in over $12.6 billion from outdoor recreation activities.
– Strengthens and progresses ongoing work to identify and protect wildlife migration corridors and associated habitat, a vital component of the larger sagebrush ecosystem.
– Strengthens NDOT’s role in habitat conservation, identifying opportunities to protect or restore sagebrush habitats and wildlife migration corridors in new or existing NDOT policies.

Sagebrush habitats cover over 50 percent of Nevada, supporting more than 360 species of conservation concern including species of wildlife, plants, and invertebrates providing recreational, economic, and quality of life values to all citizens. Many of Nevada’s economically important species such as mule deer and pronghorn rely on migration corridors within and through sagebrush habitats to connect crucial seasonal ranges and are facing an increasing number of challenges. The sagebrush ecosystem is one of the most imperiled in the U.S – greater than 50 percent of sagebrush habitats have been lost or degraded from threats such as wildfire, invasive species, climate change, and anthropogenic fragmentation. Taking steps outlined in this EO will provide benefits for the state’s sagebrush ecosystem and for many other sagebrush obligate species.

This action will further enhance Nevada’s ability to conserve our incredible lands and wildlife while supporting restoration and recreation activities that lead to jobs and income for rural and urban communities alike.

​​“Nevada’s wild landscapes provide the clear air, clean water and open space that are integral to a healthy economy and our way of life,” said Governor Steve Sisolak. “Whether it is mule deer or desert tortoises no animal thrives without a healthy ecosystem, and this executive order puts a crucial focus on the corridors through which wildlife migrate to survive.”

“Nevada is home to some of the West’s longest and most magnificent wildlife migrations, many of which are imperiled,” said Matt Skroch, project director with The Pew Charitable Trusts. “We commend Governor Sisolak’s bold action to conserve these critical wildlife pathways and the sagebrush ecosystem that these animals depend on.  This executive order will reverberate throughout the West as a strong example of how states can identify and conserve wildlife migration routes.”

“We applaud Governor Sisolak for issuing this executive order to ensure that Nevada’s unique sagebrush habitat and its important migration corridors are protected so that our wildlife populations across Nevada can not only survive, but thrive,” said Rachael Hamby, senior policy analyst for Western Resource Advocates. “By taking strong steps to protect and preserve Nevada’s vital sagebrush habitat, this order will safeguard and expand opportunities for Nevadans to experience one of the region’s truly incomparable ecosystems and help promote resiliency against the impacts of climate change.”

“We thank the governor for signing this executive order and are excited for what it means for Nevada’s wildlife. This important step towards conservation provides the Nevada Department of Wildlife the resources to work with all stakeholders using the best available science to help conserve, restore, and rehabilitate our critical wildlife migration corridors and sagebrush ecosystem.” said Russell Kuhlman, with the Nevada Wildlife Federation.

“Nevada is one of the most biodiverse states in the nation, but has one of the highest rates of at-risk wildlife species, due – in part – to the destruction of historic migration corridors. These important wildlife areas are under the constant threat of unchecked development, damaging mining practices, and the devastating effects of climate change. We thank Governor Sisolak for signing this Executive Order that will further maintain, enhance, and restore Nevada’s critical migration corridors and wildlife habitats.” said Paul Selberg, Executive Director of the Nevada Conservation League.

“Wildlife populations and hunting opportunities in Nevada depend on quality habitats and the ability of mule deer, elk, and antelope to move across the landscape,” said Carl Erquiaga, Nevada Field Representative with the Theodore Roosevelt Conservation Partnership. “TRCP greatly appreciates Governor Sisolak’s leadership in issuing an executive order that will prioritize the conservation and restoration of the sagebrush ecosystem and safeguard wildlife migration corridors in the state. We look forward to working with the Governor’s office and the Nevada Department of Wildlife in seeing it implemented so that healthy big game herds in places like the iconic Ruby Mountains will continue to provide world-class outdoor experiences for future generations of sportsmen and women.”

“The Governor’s Executive Order will assist the relevant wildlife departments with researching, maintaining, and preserving migratory corridors within our state. Our roads, highways, and overall human expansion into areas that are normally habitats for wildlife has to be balanced with their need to have safe migratory corridors. Nevadans overwhelmingly support protecting wildlife corridors, so this Executive Order gives us hope that we are that much closer to our goal of providing safe migratory areas for our natural wildlife.” said Annette Magnus, Executive Director for Institute for a Progressive Nevada.

“Nevada Bighorns Unlimited is tremendously proud to have collaborated on this executive order. We are lucky to live in a state with such a strong following of sportsmen and women who have accomplished significant conservation efforts over the years. We’d like to thank Governor Sisolak for his leadership in highlighting the importance of Nevada’s sagebrush ecosystems, the threats they face, and the quality of life they provide to all Nevadans.” said Lydia Peri, with Nevada Bighorns Unlimited.