Let Nevadans Vote Sends an Open Letter to all 17 Board of County Commissioners, County Clerks, and County Managers - Institute for a Progressive Nevada
16245
post-template-default,single,single-post,postid-16245,single-format-standard,bridge-core-2.0.6,qode-page-transition-enabled,ajax_fade,page_not_loaded,,qode-content-sidebar-responsive,qode-theme-ver-26.0,qode-theme-bridge,qode_header_in_grid,wpb-js-composer js-comp-ver-6.10.0,vc_responsive

Let Nevadans Vote Sends an Open Letter to all 17 Board of County Commissioners, County Clerks, and County Managers 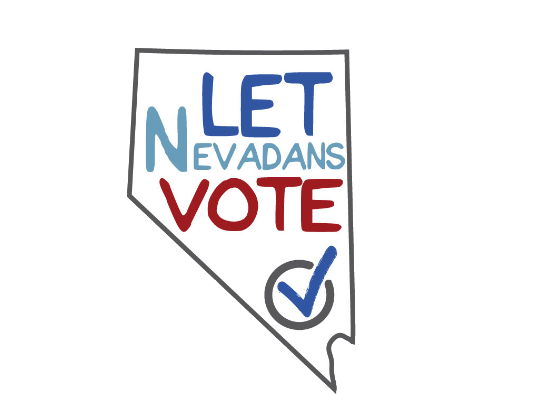 22 Apr Let Nevadans Vote Sends an Open Letter to all 17 Board of County Commissioners, County Clerks, and County Managers

Posted at 13:44h in Releases by Will Pregman
Share

Let Nevadans Vote Sends an Open Letter to all 17 Board of County Commissioners, County Clerks, and County Managers

NEVADA – This week alone, four rural Nevada counties heard similar agenda items pertaining to the transition to an all-paper ballot election and the hand count of those ballots. Rather than entertaining unfounded notions of widespread voter fraud, the Let Nevadans Vote coalition urges County Commissioners and Managers to prioritize the safety and security of their County Clerk, their office, and election workers. While seven Nevada counties have already entertained notions of paper ballots, the letter is intended to encourage the ten remaining counties to consider the harm it would cause to Nevada’s elections and how it undermines the safety and security of our electoral process.

To whom it may concern:

We, the undersigned organizations, comprising the Let Nevadans Vote coalition, respectfully submit this open letter to the Chair of the Board of County Commissioners, County Clerks, and County Managers for all 17 Nevada counties. We are a nonpartisan collaborative of organizations and individuals passionate about empowering every eligible Nevada voter with knowledge of their rights and the opportunity to make their voice heard. The purpose of this communication is to inform and provide guidance, as dedicated community members and advocates, to county officials on what we observe to be a rapidly increasing pattern of ill-advised election-related matters being placed before their consideration.

Over the past several months, at least seven Nevada counties have had late agenda item additions related to unlawful and harmful proposals to transition elections held within that respective county to a paper-ballot voting and tabulation system. These proposals often come packaged with accompanying proposals, such as to require certain identification from persons wishing to vote, to station law enforcement officers at polling places, or to change rules and regulations about the tabulation of ballots, among others.

The legality of these proposals, if they were to become law, are precarious at best. Not only would a transition away from electronic voting and counting machines present accessibility challenges to voters with disabilities, but even further, they run the risk of violating essential protections for eligible voters, as per the Voters Bill of Rights, passed and approved by Nevada voters in 2018. Attempting to alter the way in which votes are cast or tabulated would disenfranchise countless voters across the state and make the work of election officials, at both the County and State levels, much more time-consuming and difficult. Additionally, there are no laws or regulations setting forth standards to run an all-paper-ballot election or a hand count of the votes.

The practical consequences of these proposals are harmful for Nevada’s elections and every eligible Nevada voter’s ability to freely and fairly participate in the voting process. But the impact of these hearings and proposals goes even further to jeopardize the integrity of our civil society and the foundational democratic values which it rests upon.

The repeated attempts to introduce and pass such proposals, popping up in counties across the state, is not an accident; nor is it reflective of a good-faith grassroots effort on behalf of the citizens of these respective counties. The proposals share similar language and are underpinned by a common intent to stop particular votes from being cast or counted under the pretext of concern about “voter fraud”, or other types of illegal voting. Bad actors motivated by partisan interests have indicated publicly that their intent is to introduce similar measures in county commission meetings around the state. Proponents of these measures in Nevada have close ties to groups and individuals who propagated false allegations of voter fraud, vote manipulation, and coordinated illegal activity in the wake of the 2020 election. These allegations were universally found to be without standing or merit by judges across the country, up to and including the Supreme Court of the United States, with many of the litigants of these allegations facing civil and criminal penalties for their willful misconduct under oath.

A direct line can be easily traced from the communications of individuals associated with these false claims, and subsequent legal challenges, to the verbal and physical harassment and intimidation experienced by election workers in the state of Nevada during the previous election, which have all been well documented [1] [2] [3]. The heightened rage, tension, and fear produced by such actions and rhetoric culminated in the attack on our nation’s capitol on January 6, 2021, which claimed the lives of at least five people, including capitol police officers, and generated a credible and imminent threat to the lives of the Vice President, members of Congress, their staff, and members of the press.

This brings us to our present day situation. A dedicated and militant faction of Americans evidently persist in the belief that the 2020 election was ‘stolen’, and therefore illegitimate, in spite of all reason and evidence to the contrary. In so doing, this belief has metastasized into hostile, anti-social behavior, including explicit threats of violence or death and open stalking, harassment, and intimidation of public officials and their staff. Similar behavior has also been directed towards public health authorities, school board trustees, and constitutional officers in the state of Nevada in regard to other contentious issues that inspire similar contrived indignation and perceived cultural aggrievance, and based on misinformation.

No matter our race, background, or party affiliation, this sort of behavior should be seen as universally unacceptable and worthy of the harshest condemnation within a democracy. And yet, propagators and allies of this movement continue to gain momentum, which they hope to channel into deleterious alterations to our election laws, which are ultimately aimed at disenfranchising members of the electorate and cementing a partisan advantage towards their own favored candidates.

The ideology driving these county paper-ballot policies share many of the sentiments detailed above. These proposals only serve as a catalyst for further erosion of democratic norms and faith in our civic institutions. Moreover, they quickly become a vector for even more radicalization in a political climate that is increasingly growing more polarized and divided. Reports of ongoing threats and harassment towards county officials and their staff create even more undue pressure, ridicule, and negative publicity on those who are simply doing their jobs as hard-working civil servants to our Nevada home.

We ask that you carefully consider this information and the examples we have detailed in this letter. We strongly recommend that county officials review their parliamentary standards for the submission of agenda items and exercise caution and vigilance when such election-related matters are put before the body for consideration. Where counties must hear and consider such matters, we recommend that officials do what is within their lawful authority and decline to advance measures that your clerks cannot reasonably comply with.

We also respectfully urge officials to work proactively to ensure the safety of their election workers ahead of the upcoming 2022 midterm primary election, less than two months away. The integrity of our election process and democracy simply cannot accommodate hard-working poll workers and officers facing constant death threats, harassment, and intimidation directed at them during the day-to-day performance of their official duties. Across the nation, election departments faced a shortage of election workers in 2020. This shortage was exacerbated further by the portent of political violence hanging over them.

We hope that county officials in all 17 Nevada counties afford due consideration to the items discussed in this letter. Each of the undersigned organizations, and the Let Nevadans Vote coalition at large, are eager to work closely with county commissioners, registrars, clerks, law enforcement agencies, and state officials of all persuasions to advise and provide feedback, in a civil manner, to ensure the survival and success of Nevada’s highly-regarded election systems as well as the principles of civil rights and democracy. We thank you for your tireless work serving the people of Nevada each day and look forward to doing our part to ensure every eligible Nevada voter has the freedom and equitable opportunity to vote in this election.

Gariety Pruitt, For Our Future Nevada