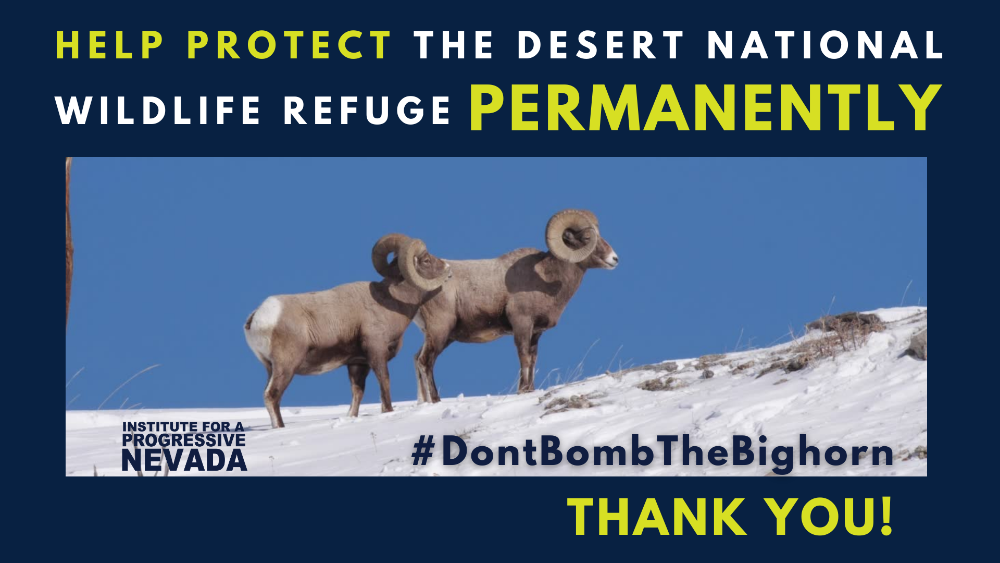 Posted at 09:30h in Releases by Will Pregman
Share

LAS VEGAS, NV – Today marks 84 years since the Desert National Wildlife Refuge (DNWR) was designated by President Franklin D. Roosevelt. Spanning 1.6 million acres just to the north of Las Vegas, the Refuge is home to Nevada’s state animal, the desert bighorn sheep. In recent years, the Air Force has asked the U.S. Fish and Wildlife Service to expand the area within the Refuge designated for their training exercises by 300,000 additional acres.

Annette Magnus, Executive Director of the Institute for a Progressive Nevada, issued the following statement:

“Nevada’s public lands are part of what makes our state unique and an attraction for outdoor recreationalists worldwide. Today, on May 20th, I’m proud to wish another ‘happy birthday’ to the Desert National Wildlife Refuge, and all the important species and natural history that resides within. In 1936, FDR recognized the importance of protecting the bighorn sheep that make their home in this territory. Protecting federally designated lands is not easy and we could not do it without the support of our Congressional delegation members.

We’re thankful for the efforts of Senator Cortez Masto, Senator Rosen, Congresswoman Titus, Congresswoman Lee, Congressman Horsford, and Congressman Amodei for continuing to advocate for conservation of the DNWR. In upcoming debate in the House and Senate Armed Services Committees over the National Defense Authorization Act, I urge lawmakers to listen to the voices of Nevadans and our delegation in opposing further military expansion into DNWR land in order to prevent damage to the desert bighorn sheep habitat and sacred indigenous lands in the area.”