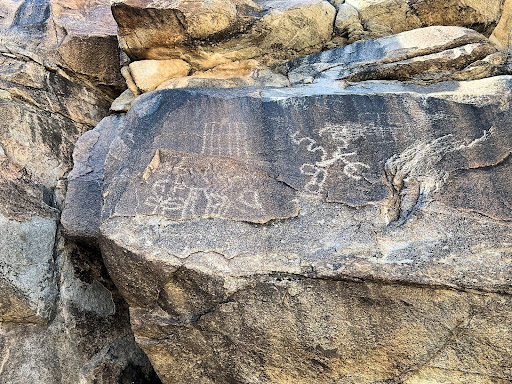 Posted at 23:16h in Releases by Will Pregman
Share

***PHOTOS FROM ALL EVENTS CAN BE FOUND HERE***

LAS VEGAS —  From September 18 to September 25, elected officials, local environmental leaders, activists, and organizations hosted week-long celebratory activities in honor of National and Nevada Public Lands Day. The 6th Annual Nevada Public Lands Day celebration consisted of educational webinars, a community park clean up, and a guided hike. Public Lands Day is meant to recognize the historical, scenic, economic, and other values of Nevada’s public lands while encouraging Nevadans to participate in volunteer stewardship activities that help conserve the unique public lands that are only found in our state.

To complete the week-long celebration, on Sunday, September 25, activists and advocates led a hike to Hiko Springs, situated in the area of the proposed Avi Kwa Ame National Monument. During the hike, participants explored the Southern corner of the monument site to see Indigenous petroglyphs, local trees, and even local wildlife, including a rattlesnake. Hikers called for the designation of Avi Kwa Ame as a National Monument, for its historical, cultural, and spiritual significance to Indigenous communities, and the biological necessity of protecting the plants and wildlife on the land as well.

With record-breaking extreme heat waves, massive wildfires ravaging northern Nevada, and a federally declared water shortage for Lake Mead in the South, the conservation community brought together state and federal leaders to stress the urgency of immediate climate action, and thank Nevada’s elected leaders who supported the recently-passed Inflation Reduction Act, which puts the country on the path to reducing carbon emissions by roughly 40 percent by 2030 — the largest step our federal government has ever taken to fight the climate crisis.

When the Biden administration announced its America the Beautiful initiative through the Department of the Interior, to conserve 30% of US lands and waters by 2030, Nevada wasted no time putting forward its own resolution supporting the measure, making the state the first in the nation to put out a 30 by 30 resolution of its kind. As one of the most biodiverse states in the nation, and facing rapid loss to wildlife and habitats, Nevada is a ripe for policies encouraging cross-collaboration among federal agencies, tribes, state and local governments, farmers, ranchers, hunters, outdoor recreationalists, and other stakeholders to protect and preserve Nevada’s lands, waters, and wildlife.